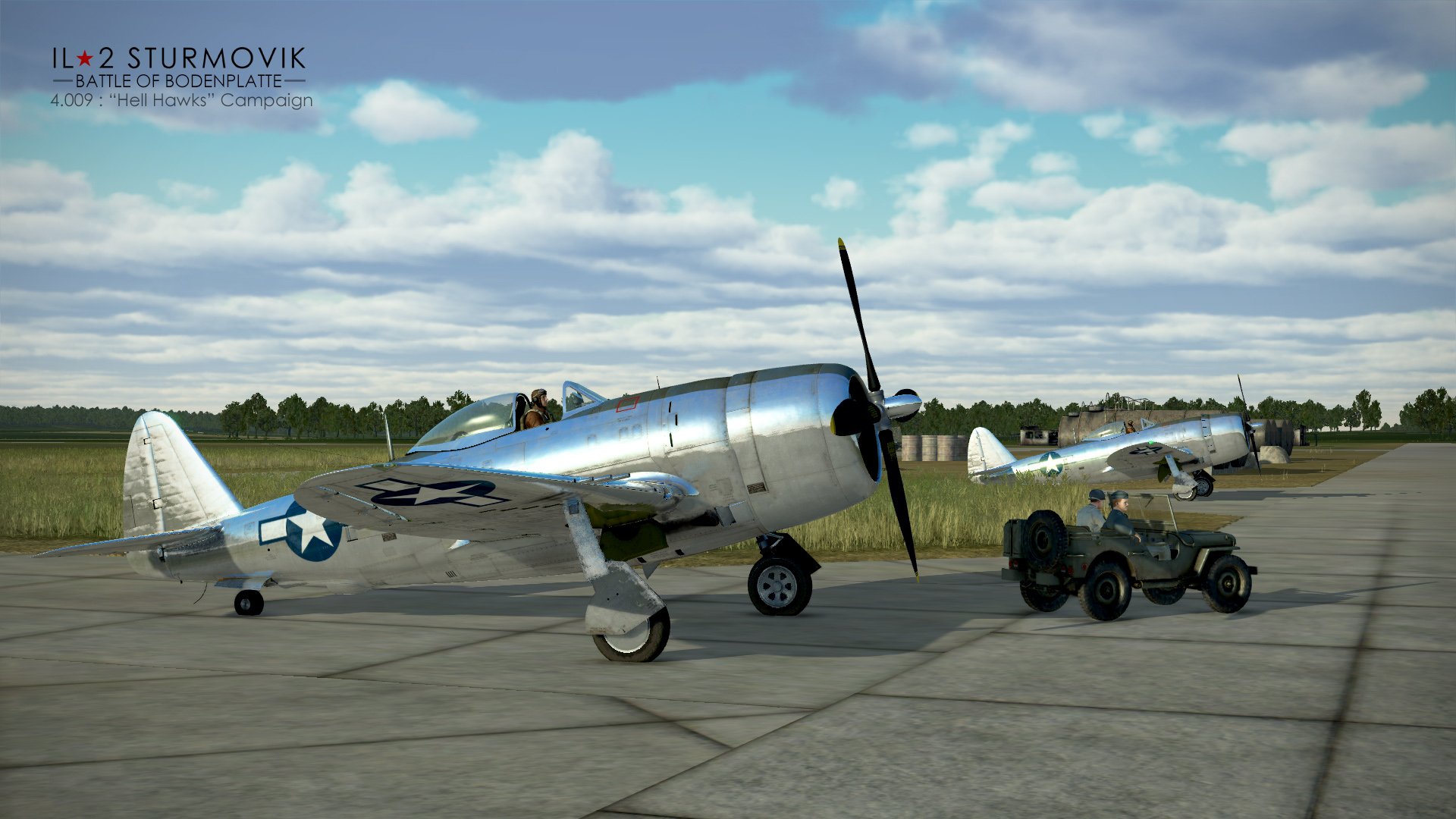 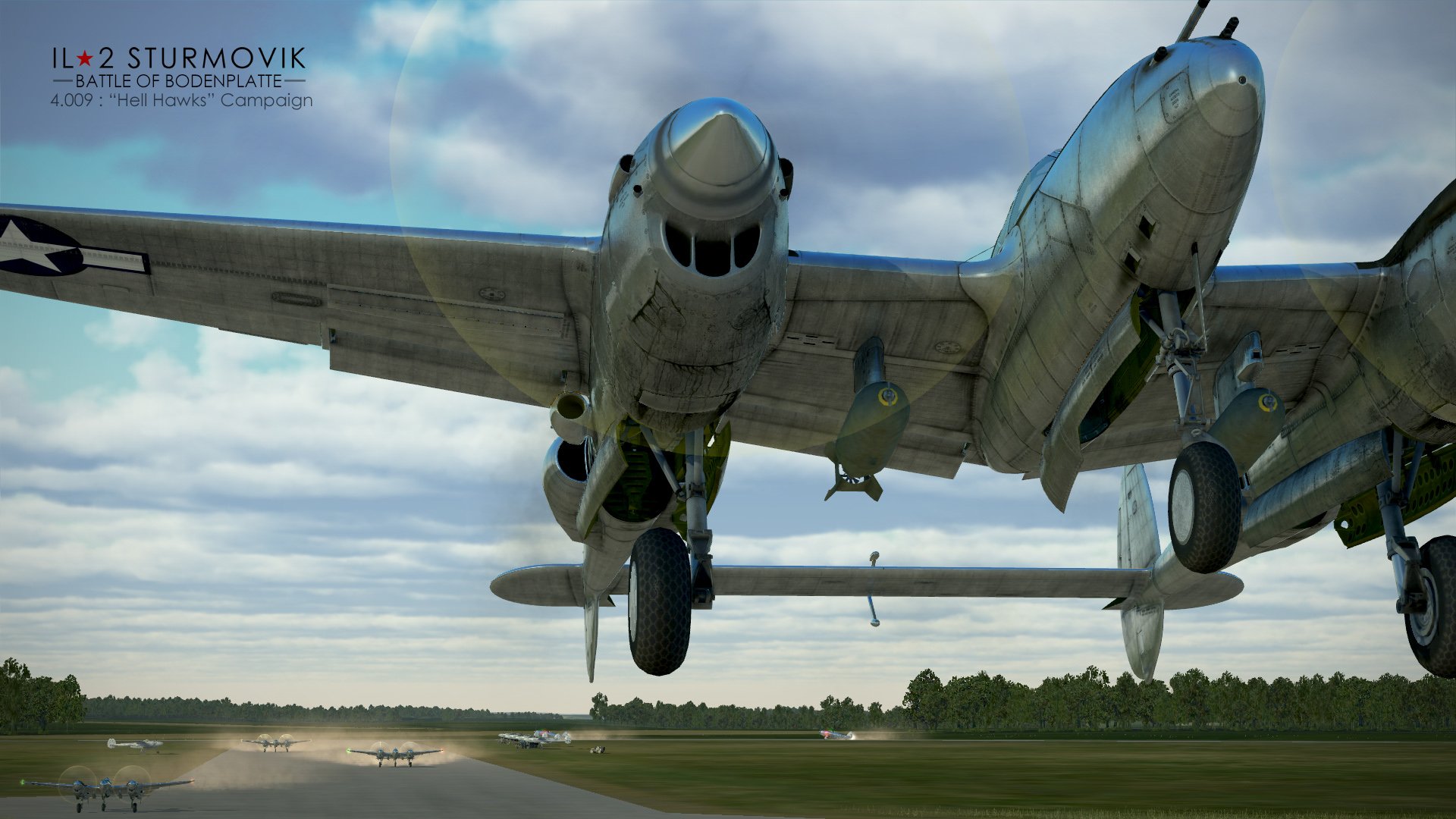 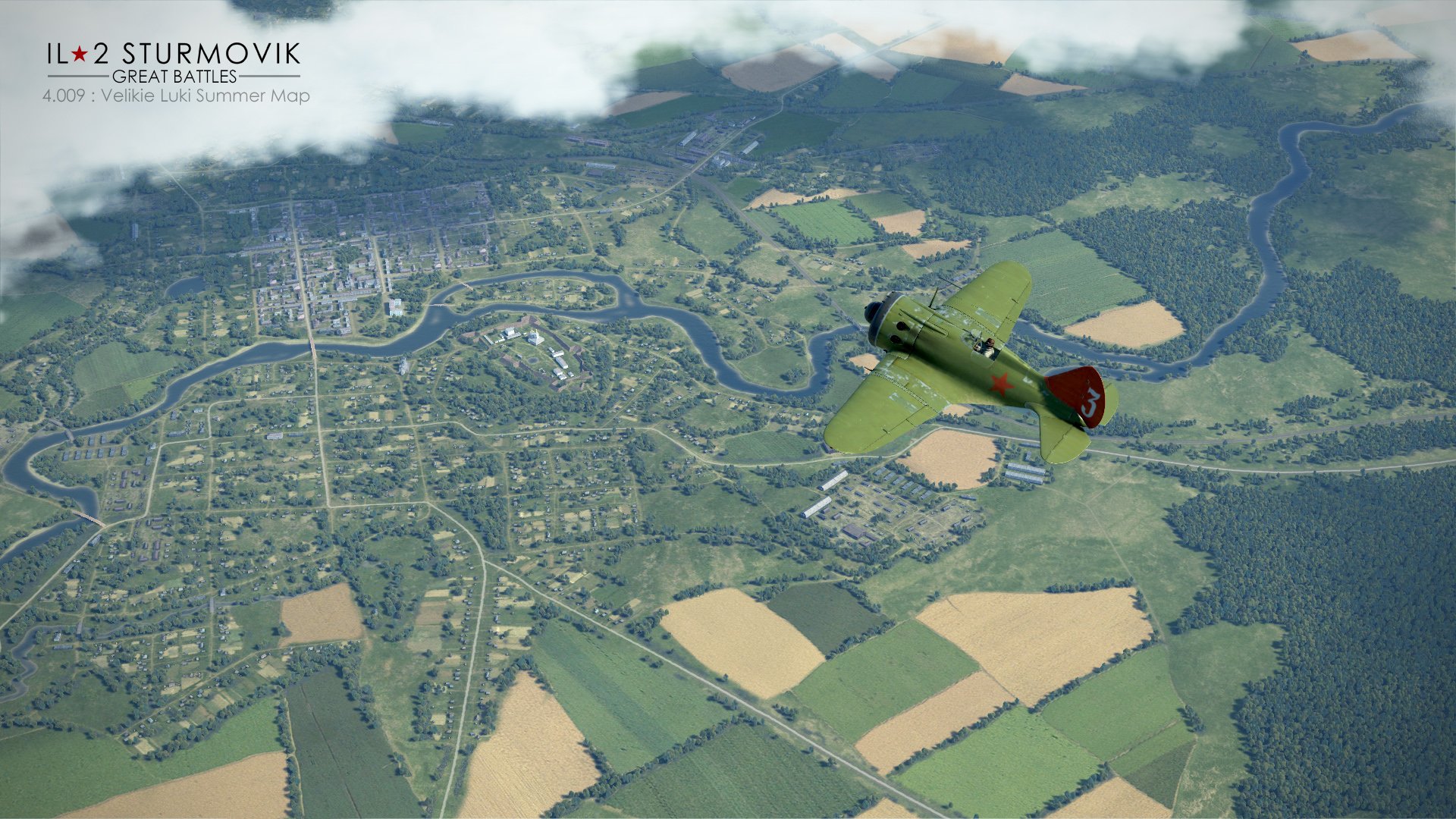 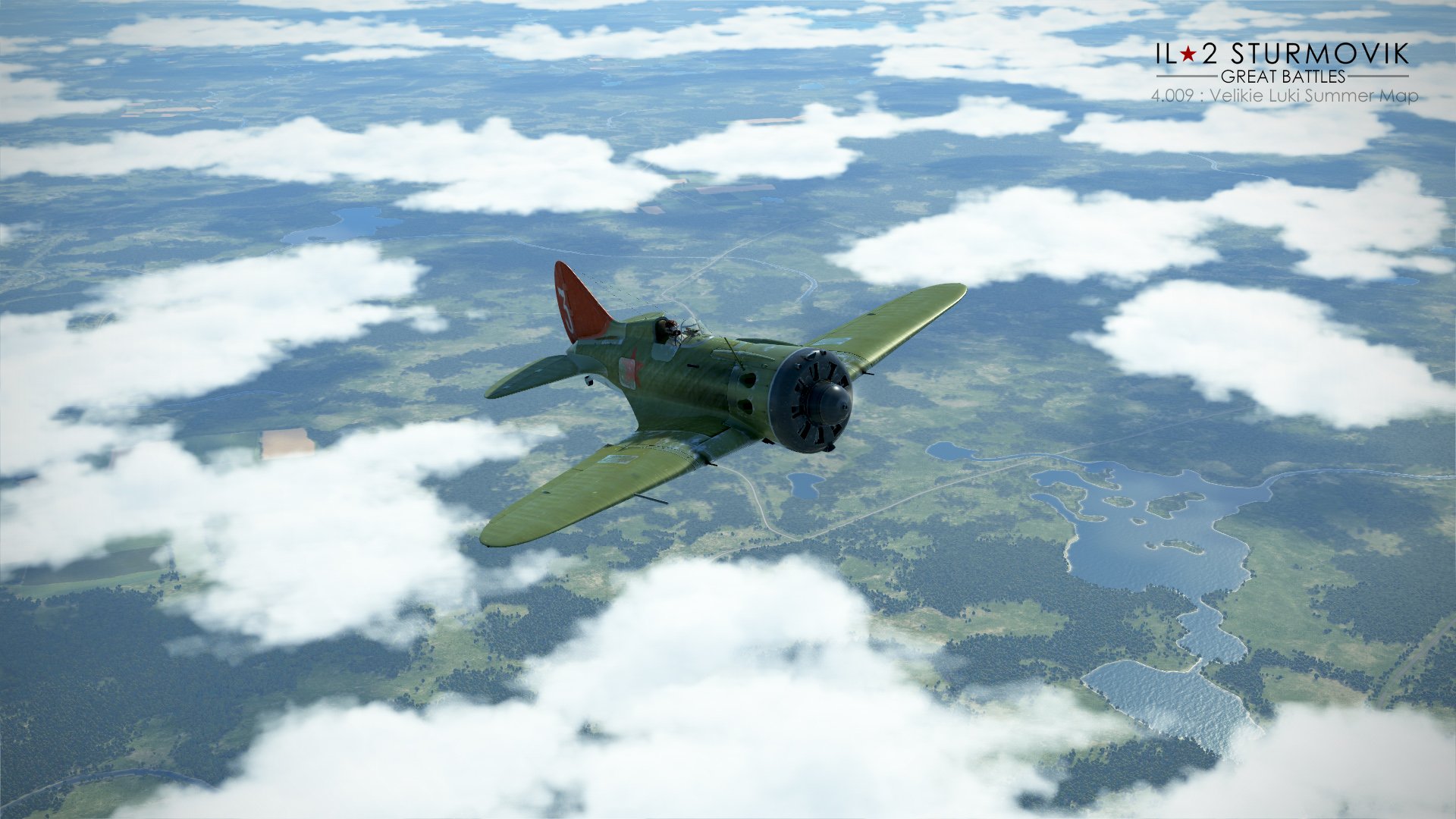 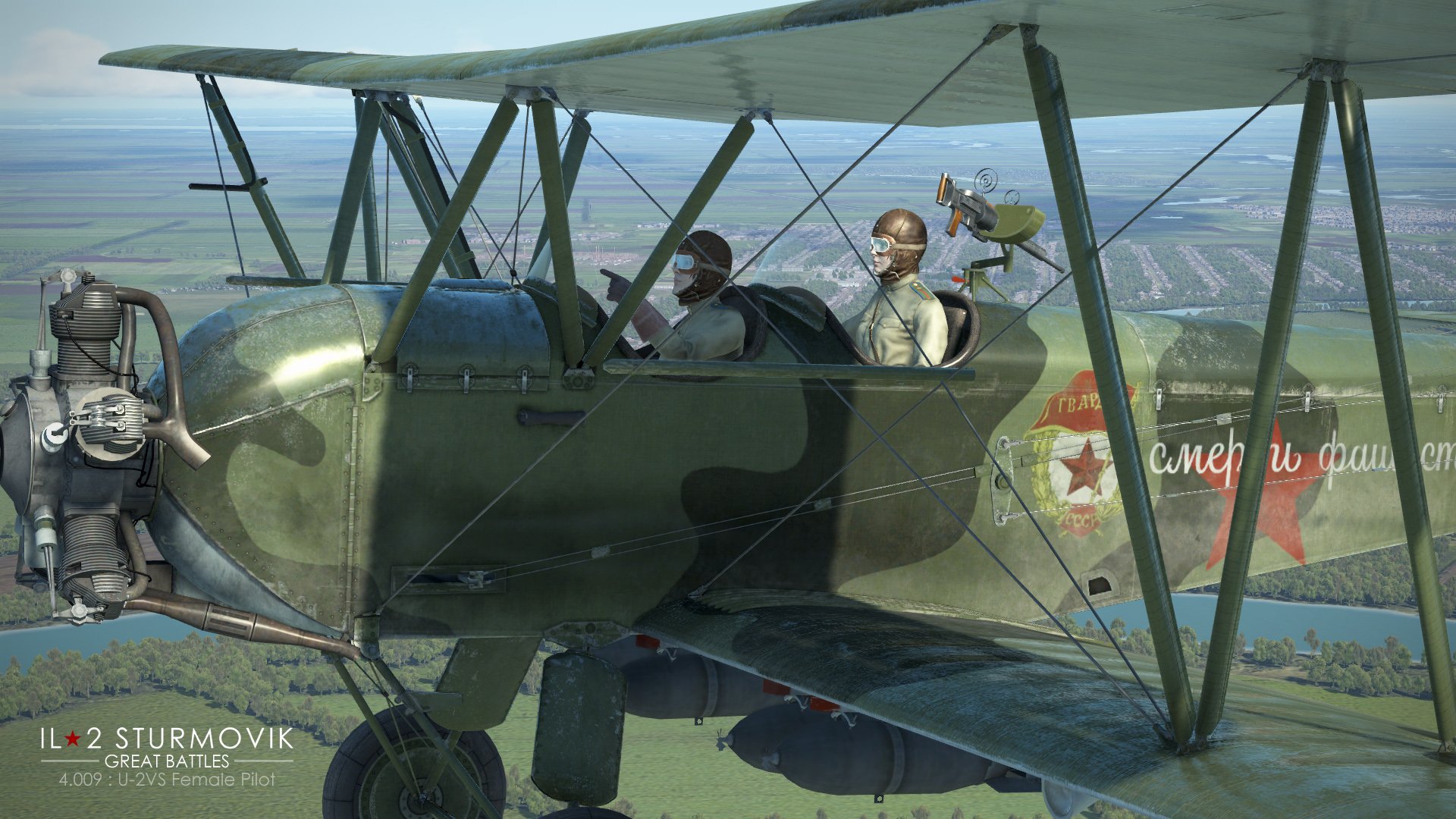 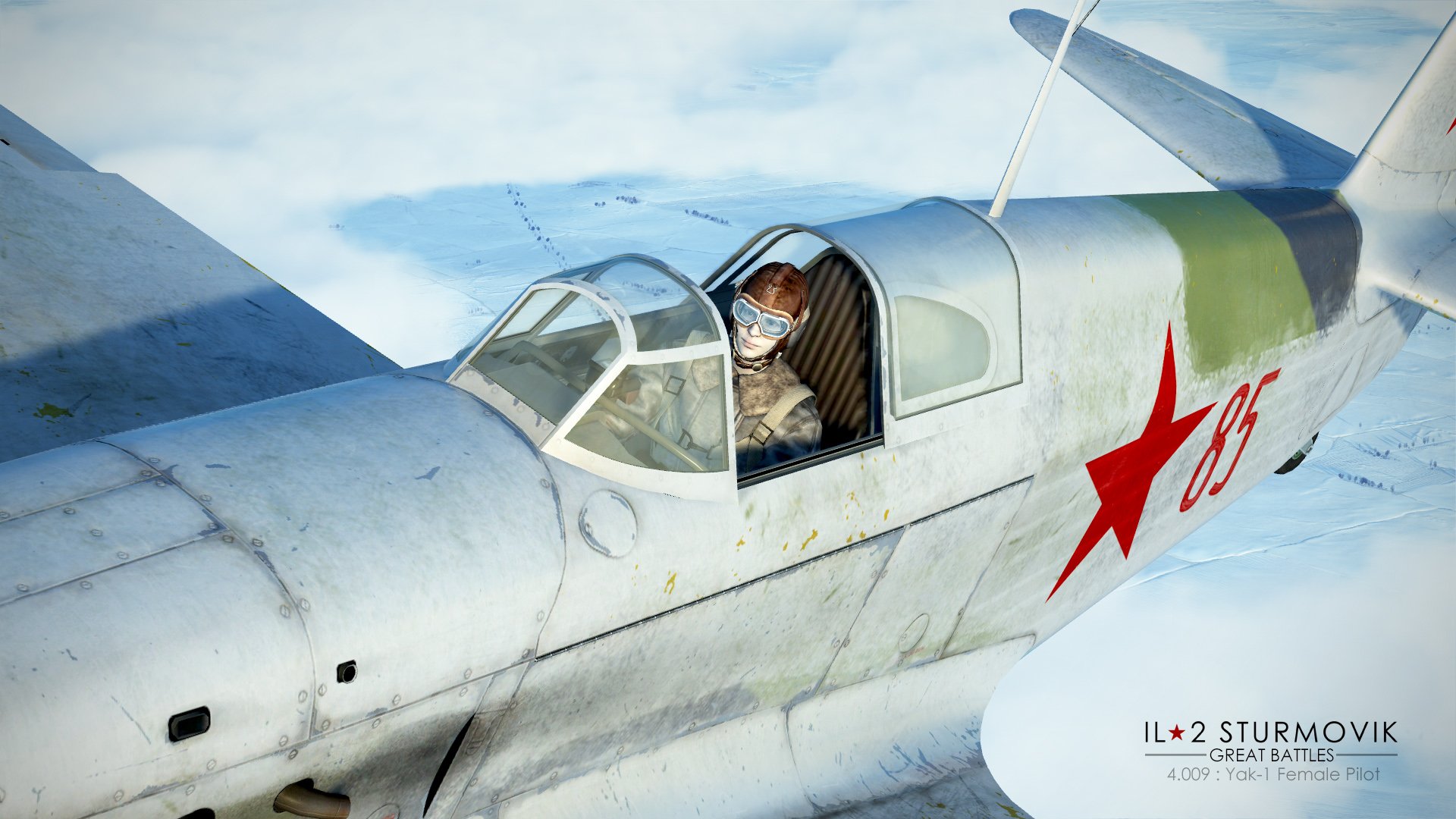 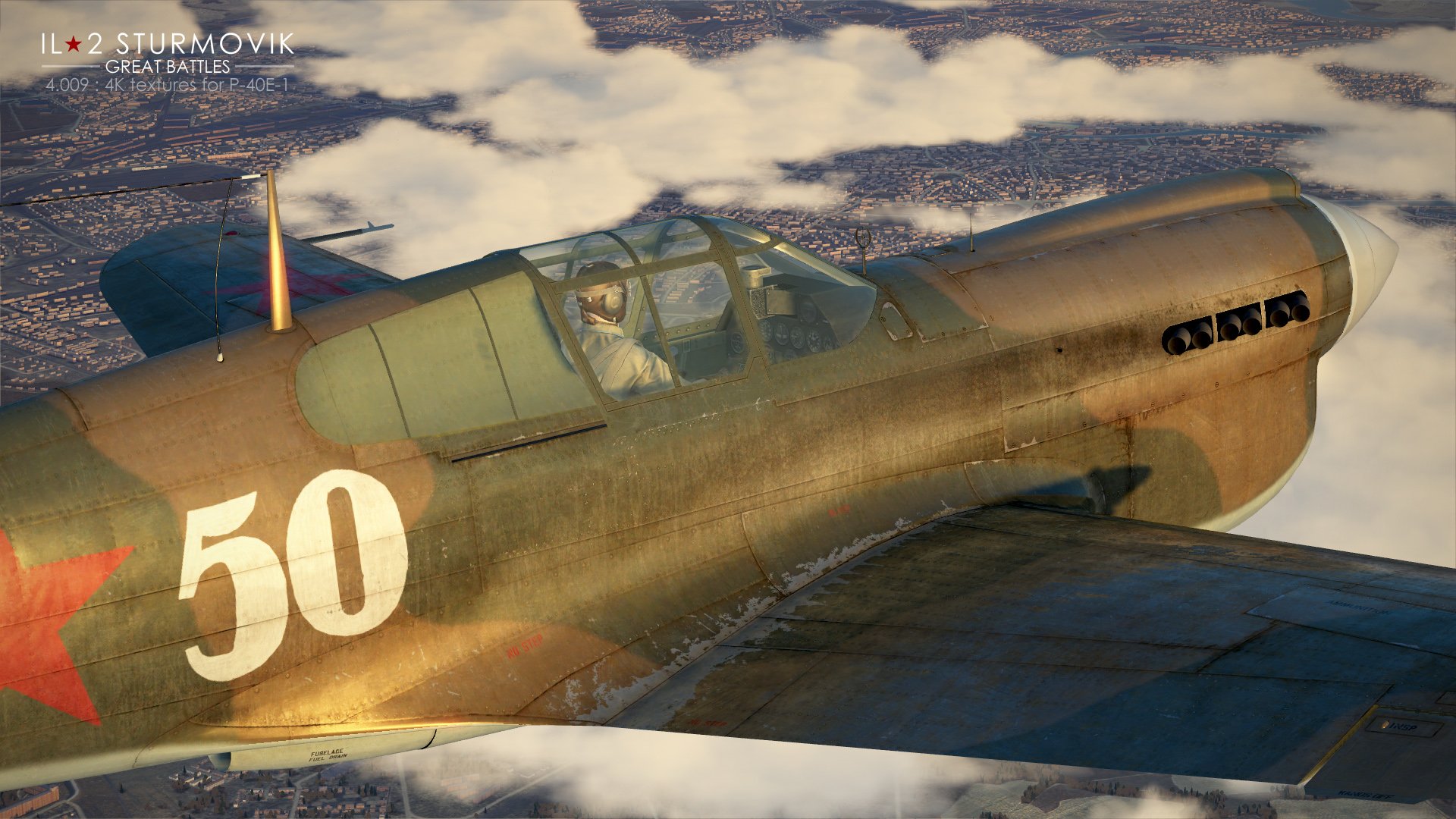 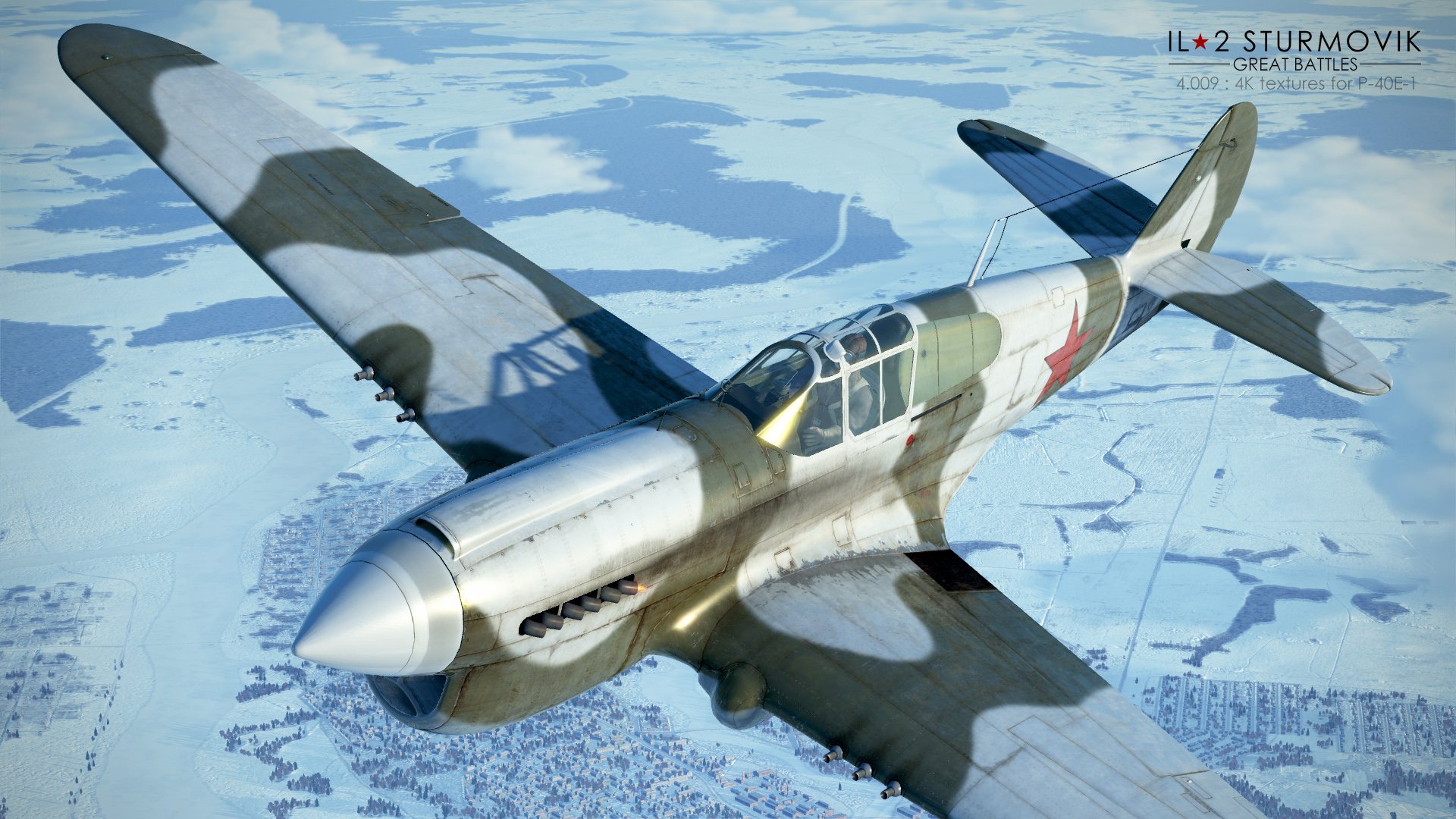 1. The new map Velikiye Luki (Summer) is available to all owners of any IL-2: Great Battles module;
2. Velikiye Luki (Winter) map has been improved and updated;
3. The new historical campaign “Hell Hawks over the Bulge” is released;
4. The visual models of the U-2VS Collector Plane crew members were replaced with new ones in the correct uniform (according to the year set in a mission, without a helmet and a parachute);
5. Female crews option added to U-2VS, Yak-1 ser. 69 and Yak-1b ser. 127 aircraft;
6. P-40E-1 now has 4K quality external textures thanks to Martin =ICDP= Catney;
7. Each Bodenplatte aircraft now has its own single mission;
8. Each Tank Crew - Battle of Prokhorovka tank now has its own single mission;
9. Since the technochat can be disabled by difficulty settings, the critical information such as the service maintenance indication (refueling, repair, first aid) will be visible in the HUD anyway;

10. An AI flight leader shouldn’t circle on the ground after landing;
11. An AI error in the following terrain routine has been fixed that could cause the AI-controlled aircraft to stuck in the climb spiral and the AI wingmen in the formation to stall;
12. An AI flight leader will correctly maintain the set speed on the route;
13. AI climbing on the route corrected (they shouldn’t do too shallow of a climb and accelerate more than required as a result);
14. AI pilots shouldn’t climb on the route too steeply and, as a result, lose speed too quickly;
15. The low route speed limit has been corrected for a number of aircraft, enabling them to reach a maximum climb rate;
16. AI settings corrected for Yak-1, Yak-1b and Tempest, making them able to correctly maintain their position in a formation in level flight;
17. AI settings corrected for P-47D-22, making the formation flying more stable;
18. AI settings corrected for Flying Circus aircraft, making the formation flying more stable when descending;

19. IMPORTANT: all player-controllable tanks have detailed descriptions of their equipment, general control and functionality recommendations and individual lists of input commands accessible from the in-game Esc menu;
20. All the player-controlled tanks have animated and audible MG and main gun traveling locks;
21. Important information on sighting and radio communication equipment has been added to all tank help screens;
22. The powered turret traversing drives (where available) are automatically switched to manual mode at low turn speed for precise aiming and from manual to the powered mode drive for turning the turret fast;
23. Pz.III Ausf.M, Pz.IV Ausf.G, Pz.V Ausf.D, Pz.VI Ausf.H1 and M4A2 have functioning gyrocompass course director (controlled by the LShift + Z / LShift + X keys);
24. DT machineguns (T-34-76UVZ-194 and KV-1s) and M2 .50 AA machineguns (M4A2) iron sights can be adjusted for range (RAlt + Semicolon / RAlt + Period keys);
25. All tank radios have audible umformers (electro-mechanical converters) sounds;
26. Pz.III Ausf.M, Pz.IV Ausf.G, Pz.V Ausf.D, Pz.VI Ausf.H1 have audible gyrocompass sounds;
27. SU-152 and KV-1s: the control levers are locked in the parking position by the corresponding buttons;
28. Enabling and disabling a parking brake is reflected in the technochat;
29. To view a correct fuel reading on the KV-1s and Pz.III Ausf.M tanks, it is necessary to pump the fuel gauge first using the F key;
30. KV-1s: it’s possible to switch the fuel gauge indication between the different tanks with the LShift + F key;
31. M4A2: it’s possible to switch the fuel gauge to display the oil level as well as switch between the different tanks with the LShift + F key;
32. You can raise and lower the M4A2 commander visor;
33. M4A2 engine clutch lock buttons are correctly animated in case of a clutch failure;
34. You can use the loader visor when playing as the gunner on M4A2;
35. M4A2 AA machinegun can be shot off;
36. SU-152, Sd.Kfz.184, Pz.III Ausf.M and Pz.IV have functioning gun recoil indicators;
37. Pz.V Ausf.D ready to fire signal lamp has been corrected;
38. Pz.V Ausf.D gun mantlet armor has been corrected (its upper and low parts became more detailed);
39. All crew members who did not have access to tank intercom equipment are correctly displayed without headphones and microphones;
40. MGs and main guns won’t move a little in a stowed position;
41. The German tank commander model as been corrected (he is easier to hit in the unbuttoned position).
42. The crew models won’t appear and disappear when the camera moves in the cockpit (except the no-restrictions mode in VR);
43. The lateral aiming correction marks were corrected on German tanks;
44. It’s no longer possible to control tank weapons from certain crew stations that did not have access to them;
45. The ‘no ammo left’ message shouldn’t be repeated many times anymore;
46. AI controlled SPGs turn to face the target when ordered to engage it;
47. The ‘fuel system repaired’ message shouldn’t be repeated many times anymore;
48. The ammo counter correctly displays the remaining rounds when certain ammo load-outs are selected;

49. Yak-9T engine control helpers won’t cause the engine to stop when turned on at low temperatures;
50. Engine control helpers won’t incorrectly limit the engine speed after a short shutdown on twin-engine aircraft;
51. Ice Ring campaign is available in the French language thanks to our community member DN308;
52. Tank and aircraft turrets with 3 degrees of freedom have correct stowed positions;
53. Paratroopers jump from Ju-52 correctly;
54. P-38J: drag and pitching moment from the released dive flaps have been increased;
55. Il-2 model 1943: the front iron sight won’t fall off at minimal damage;
56. Pe-2 series 35 bomber: interrupting the startup procedure won’t make it impossible to start again;
57. The problem with resetting the controls to zero when switching between the engines on multi-engine aircraft has been fixed;
58. Bristol Fighter F2B control stick animation has been corrected;
59. A-20B: black artifacts that could be seen from the upper gunner station were removed;
60. Lewis and DT machine guns ammo drum won’t visibly ‘jump’ when reloaded;
61. Aircraft guns ammo reserve is correct now (it was 1 round short);
62. It is no longer possible to reload the magazine when the machine gun is cocked, which led to reloading animation errors;
63. Fighter and tank crew models are being loaded in the sim faster;
64. Character animations were further optimized, which could reduce the stuttering on some configurations;
65. Soviet and American pilots won’t be invulnerable when holding a flare gun or a pistol;
66. MLRS artillery won’t try to shoot at paratroopers;
67. The jerky behavior of rail cars on terrain bends and bridge slopes has been fixed;
68. A bug that could destroy a train when it changed the direction of movement has been fixed;
69. Sorting the list of game servers by the number of players now sorts from highest to lowest on the first click;
70. Fixed an issue that caused the world lighting to have a wrong shade for several seconds at the beginning of the mission;
71. The “F4” camera (chase camera) won’t cause graphics artifacts to appear;
72. A correct hangar will be displayed in the multiplayer lobby (previously it was always the summer one);
73. Camera behavior on mission end has been improved;
74. Numerous static objects won’t disappear from view to early and their collision models were corrected;
75. IV / JG27 will correctly continue after January 23rd in Rheinland career mode;
76. Rheinland Career mode cutscenes added;
77. The service times for all equipment have been adjusted. Now a service operation takes 2-4 minutes at the default service speed (x1 value set in Mission Editor).
78. The tank and aircraft repair settings were clarified in the Mission Editor dialog window.
"Il faut préférer la modestie de ceux qui s'associent pour combattre au triomphe passager de celui qui s'isole." Cdt De Rose CCG: https://escadrilleccg.forumactif.com/
Haut